On the East wall of the Chinese Garden is a replica of "Along the River During the Qingming Festival," a painting attributed to the Song Dynasty artist Zhang Zeduan (1085-1145). 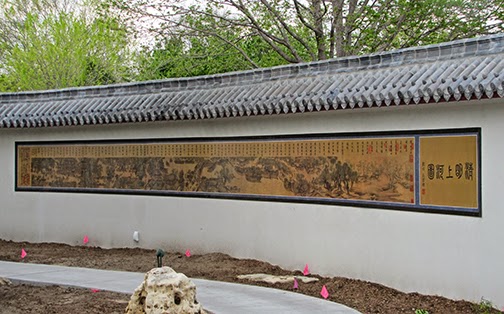 It captures the daily life and landscape of the capital, Bianjing (today's Kaifeng). The painting is considered to be the most renowned work among all Chinese paintings and has been called "China's Mona Lisa."
Posted by simpsonconst.com at 11:36 AM

Overlooking the koi pond is the Chinese Garden’s principal building: the Rose Wind Pavilion. It is architecturally detailed in Song Dynasty style and will be the place for assembly, wedding photos and other activities. Traditionally, the southeast part of the Scholar-type Chinese garden is the housing area. This part is a living and working area; it connects the noisy, dirty "earthly world" with the pure, peaceful "dream world" of the garden. 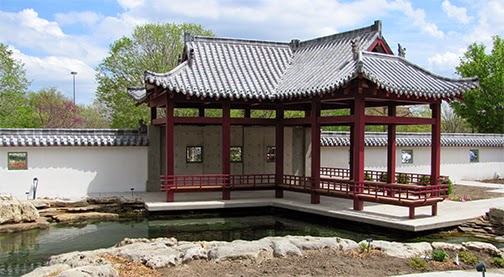 The pillars of the Pavilions are red, as this color is believed to bring joy and good fortune. The roof tiles on the two pavilions, the entry and the wall all came from Louyang City in the Henan Province, China. There are a variety of “roof beasts” who, tradition tells us, protect the structures, especially from fire and in our climate, hopefully hail.
Posted by simpsonconst.com at 6:50 AM 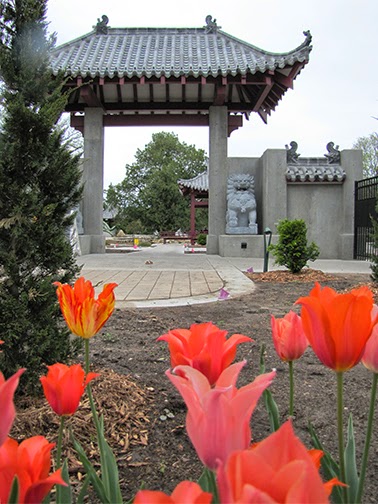 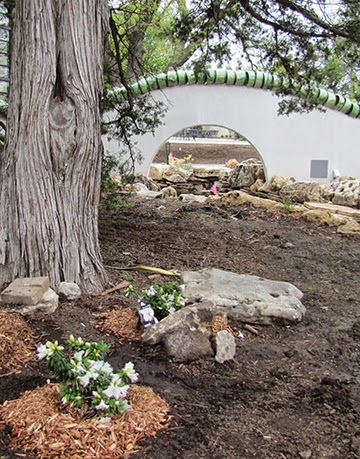 Posted by simpsonconst.com at 8:03 AM

Who is Guarding the Garden

There may be more than one soul hesitant to enter Botanica’s Chinese Garden, and not just because of the rumored Dragon within. 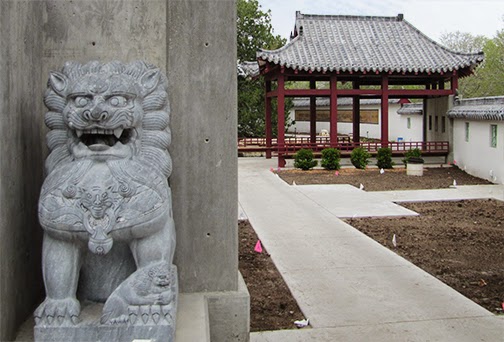 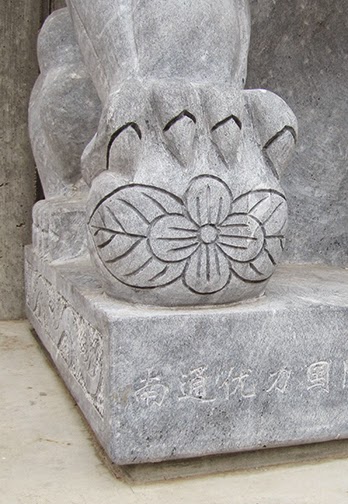 Flanking the Garden’s entrance are two formidable Imperial Guardian Lions, or Foo Dogs as we call them in the West. At first glance, the pair might seem identical, but look closer. Foo Dogs are traditionally displayed in pairs: the male to your right as you stand outside the Garden, the female to your left.

A ball under the male’s right paw, carved with the Flower of Life, symbolizes his authority over the world. 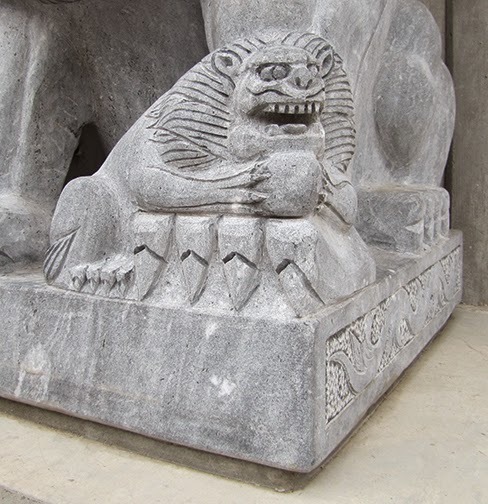 On the left paw of the female you will find a cub, this is because she represents nurture and the cycle of life. Traditionally the female Foo Dog is said to protect those within the Garden, while the male guards the physical structure.

There is a stone pearl inside each Foo Dogs’ mouth, large enough to move around but not be removed. Anyone brave enough is welcome to put their hand inside the mouth of either beast and gently roll the stone, as to do so is said to bring good luck. 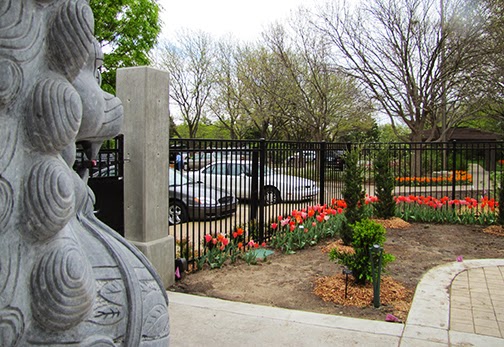 Posted by simpsonconst.com at 12:22 PM

What's in a Window

Peeking through the windows of Botanica’s Chinese Garden isn't only allowed, it’s encouraged.

These aren't just ordinary windows either, they are decorative Leak Windows. “Of course they leak,” you say. “It’s Springtime in Kansas, it’s raining and there is no glass in them!” Yes, that’s true, but they are not called Leak Windows because they let in the rain, after all it’s a garden and rain is good, but rather because they allow light to leak into the garden and views of the garden to leak out into the world.

There are eleven unique Leak Windows, ten square and one round, designed by local artist Chiaw-Weai Loo and built by Jensen Design. These designs include the Four Gentlemen: plum, bamboo, chrysanthemum, and orchid; the Four Season Flowers: orchid (Spring), lotus (Summer), chrysanthemum (Autumn) and plum (Winter); as well as our Three Winter Friends: pine, bamboo and plum. Each design has a special meaning, however two are particularly significant to our Garden: the plum blossom and the chrysanthemum.

Kaifeng, Henan, China, a sister city to Wichita, is known as the City of Chrysanthemum, hence the large round window that is part of the Dragon and the tenth square window are both chrysanthemum designs. From mid-October to mid-November every year, Kaifeng is abloom with several million pots featuring 1,000+ varieties of chrysanthemums, which are symbolic of nobility.

Leading up to the Grand Opening of the Chinese Garden of Friendship, we will highlight unique features of the Garden and their historical and cultural significance.
Posted by simpsonconst.com at 8:20 AM

Calling all Future Architects, Engineers and Construction Specialists! Botanica is hosting a Fairy House Competition during their annual Tulips, Fairies and Forts Celebration. 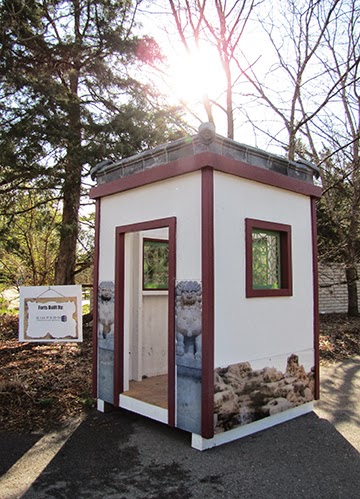 Visit Botanica.org for details and learn how to enter your own Fairy House for a chance to win a 1-year Botanica Membership... watch out for Fairies!

Posted by simpsonconst.com at 7:45 AM

Shrubs wait to be planted outside the Chinese Garden gates. Planting will be done in stages to prepare for the Garden's Grand Opening in June. 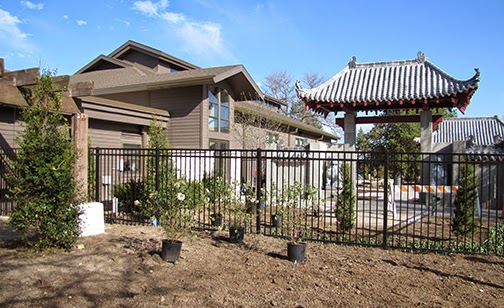 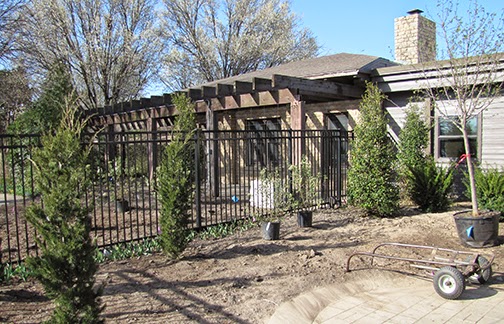 Posted by simpsonconst.com at 7:36 AM