Saturday, June 6 - 10 a.m. to 2 p.m.
Chinese Arts & Crafts for Children. Make your own Chinese dragon puppet and paper fans. Learn about fun painting techniques and more at craft stations throughout the garden and terrace.

Sunday, June 7 - 1:30 to 3 p.m.
Tai Chi & Tea in the Meadow. Learn the ancient art from local instructor Grace Wu. Follow the lesson up with delicious sips donated by The Spice Merchant.

Monday, June 8 - 6:30 to 8:30 p.m.
Paint the Towne will be presenting a Chinese painting tutorial by reservation only in the Lotus Hall. Wine and treats will accompany the easels and brushes. Also get a quick lesson on the art of Chinese Calligraphy.*

Tuesday, June 9 - 5:30 to 8 p.m.
Traditional Tuesday on the Terrace featuring tunes from Uche. Friends of Botanica will prepare a scrumptious Chinese meal for $7.

Wednesday, June 10 - 12:15 to 1 p.m.
Lunchtime Lecture highlights the skills and knowledge of talented Chinese artists Jennie Becker & Chiaw-Weai Loo with lunch being served at 11 a.m. Each will speak for 20 minutes on their specific style.

Posted by simpsonconst.com at 12:41 PM No comments:

Botanica ready to open its Chinese Garden of Friendship

Visitors to Botanica can be transported to another continent in the new Chinese Garden of Friendship that will officially open there on June 5.

With its moon gates, foo dogs, roof beasts and 87-foot dragon, the garden is a tribute to Wichita’s sister city in China, Kaifeng (pronounced kye-FONG).

The traditional scholar garden of a third of an acre has plants, of course, but the emphasis is on structures, art, water and creatures – including real koi fish in the pond that have already spawned. The elements have been selected to reflect Chinese culture, including its spirituality and mythology, geography and history, language and art.

“People are amazed at the cultural impact, and that was our goal,” said Marty Miller, director of Botanica. Members of Wichita’s Chinese community were involved in the planning, and Miller visited Kaifeng in 2012. “That’s why we chose the scholar garden. Scholar gardens are pretty prevalent in Kaifeng.”

Read the full article by Annie at www.kansas.com.
Posted by simpsonconst.com at 12:27 PM

Why Our Dragon has Five Claws

Some might be surprised to find a Dragon in Botanica’s Chinese Garden of Friendship. It makes more sense when one learns that unlike the Western idea of devilish dragons, Chinese tradition tells us the Dragon is benevolent, providing protection to those in need. 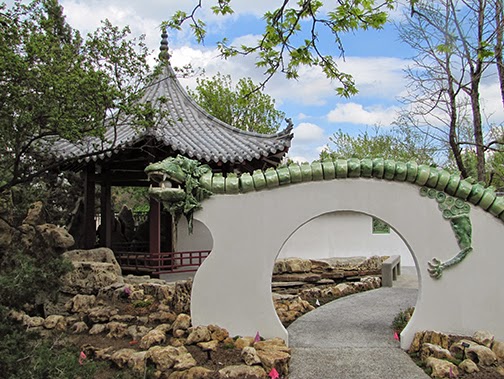 Representing power, wisdom and good fortune, the Dragon was oft adopted by the Emperor as a symbol of his imperial authority. In fact, several dynasties held that no one other than the Emperor was allowed to wear the five-clawed Dragon. Nobles were allowed to display dragons with four claws, while the commoner’s dragon only had three. 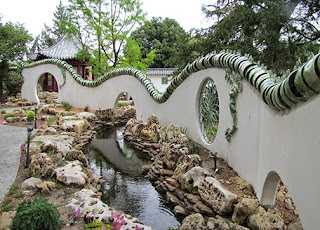 You might also notice our Dragon follows the curve of the stream. This is because, in addition to warding off evil spirits, the Dragon has the power to control water, rain, lakes, rivers and the sea. Folklore holds that the pearl in his mouth is the source of his power and allows him to ascend from the “Earthly World” represented in our Garden by Rose Wind Pavilion, to the “Heavenly World,” our Treasured Friend Pavilion.

Local Artist Jennie Becker sculpted over 200 unique porcelain clay dragon scales along with the head, legs and tail which, placed along a rolling wall, give the Dragon an organic presence and sense of movement.

Despite the Dragon’s benign image, the reverence he is given in Chinese culture confirms that it is unwise to deface or defile any image of a Dragon.

Posted by simpsonconst.com at 7:41 AM

The northwest part of the Chinese Garden of Friendship is the “dream,” or “heavenly,” world. It is believed that the Divine rule this area and have power and authority, in contrast to the southeast part. Designed as part of the house owner’s world view, it is seen as the reflection of the perfect universe in his or her mind, and therefore is a very personalized area. 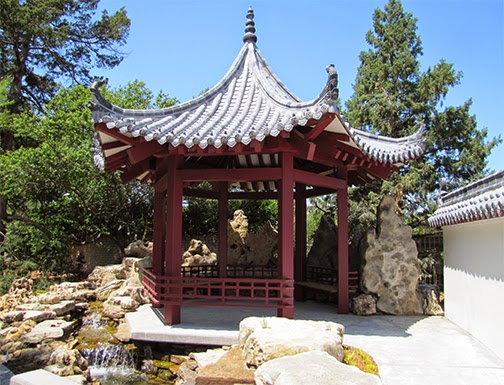 Beyond the Thousand-Foot Bridge is the Treasured Friend Pavilion, an inviting place for gathering friends to discuss politics, poetry or philosophy. A group of “holy rocks” from the Kansas Flint Hills surrounds the Pavilion, representing the mountains of our sister city. Designed to promote inner peace, personal awareness, understanding and meditation, the Treasured Friend Pavilion also offers an ideal and private place to enjoy the entire garden.
Posted by simpsonconst.com at 1:11 PM

Here is a sneak preview of Botanica's Chinese Garden of Friendship! This video was taken as part of a live broadcast on Twitter. You can follow the City on Twitter @CityofWichita! Learn more about the new garden and the opening events which will take place in early June at botanica.org.

Posted by simpsonconst.com at 1:26 PM

It might make one wonder to know the Chinese Garden has a “Thousand-Foot Bridge;” after all that would be longer than three American football fields! 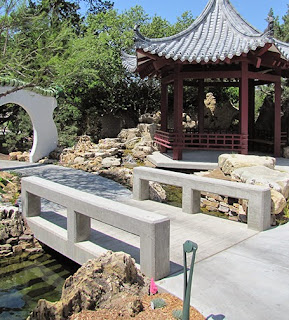 The name of our bridge comes not from its actual length, but from its power to connect us to faraway places. It was named to represent the friendship with Kaifeng, the sister city of Wichita, and after a poem by Li Bai entitled “Farewell My Friend Wang Lun.”

For so the story goes: “One day, Li Bai goes on abroad. He is about to sail when there’s stamping and singing on shore. Oh! Here comes Wang Lun to see him off, who is Li Bai’s best friend. Li Bai is very excited to see his best friend at this leaving moment. But he is sad, too. So he can’t say a simple sentence. He knows that words can’t express their friendship. Although the Peach Blossom Pool is one thousand feet deep, it can’t match Wang Lun’s love for him.” 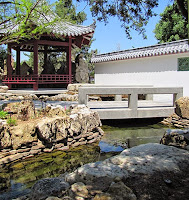 “I, Li Bai, sit aboard a ship about to go
When suddenly on shore your farewell songs overflow.
However deep the Lake of Peach Blossom may be,
It’s not so deep, O Wang Lun! as your love for me.”

*Translation courtesy of Jin Tang, Chinese Garden of Friendship Committee Member
Posted by simpsonconst.com at 8:12 AM

The water flowing through the Chinese Garden of Friendship has a very soothing sound, hence called the Heavenly Sound Water. The first part of its Chinese name, Tian Lai Quan, means the “sound of Mother Nature.”

Posted by simpsonconst.com at 5:58 AM